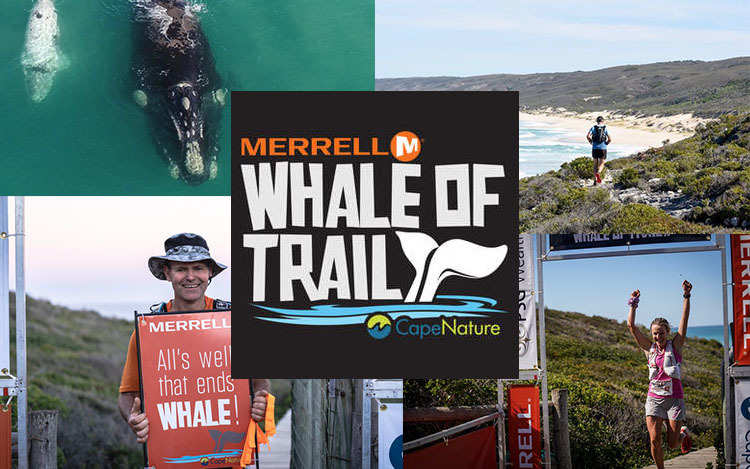 The 2018 Merrell Whale of Trail, a 53km ultra trail set in the pristine De Hoop Nature Reserve, saw 83 trail enthusiasts take to the iconic five-day hiking trail that for this one day a year, is condensed into a single-day race. Amongst the 83 starters, a star-studded cast of South Africa’s top runners raced for a cumulative R100k, thanks to new sponsors PSG Wealth and De Hoop Nature Reserve. 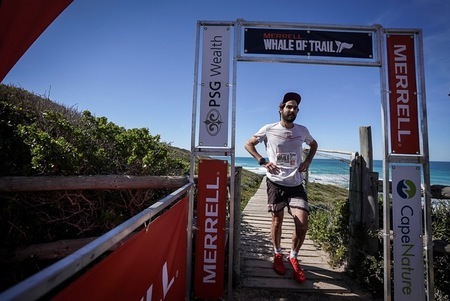 Kane Reilly took off in front from the start at Potberg, forming a break-away group with Robbie Rorich and Bernard Rukadza. The three had established a seven-minute lead by the first check point (CP), 14km in, arriving at the CP well within record time. By the next CP, Rukadza had made a move into second place, with Rorich hanging on to third, but dropping off the pace.

“The race really started when we hit the beach,” said Rukadza. From the half way point, where the trail meets the coastline, Rukadza continued to chase, working to slowly lessen the gap between himself and Reilly.

Reilly who got off to a blistering start maintained his lead and pace through to the coastline. “The first half of the Whale of Trail really invites fast, smooth running. I knew I was racing Bernard (Rukadza), so I wanted to use the mountainous section to get ahead. That was my plan, but when we started it ended up being such an enjoyable trail to run that we maybe went a bit faster than we planned.”

Like Rukadza, Reilly agreed that the beach section was tough. “I just thought about people that do those long runs across deserts and got through it.” Despite closing the gap from 8min to 4.5min, Rukadza just couldn’t catch Reilly, and it was Reilly who crossed the line first, obliterating the existing course record and earning himself the record bonus from De Hoop Collection. Reilly finished in a time of, 04:39:52, Rukadza 04:44:15.

Rorich was overtaken by Christiaan Greyling with 7km to go. Greyling, who finished second last year, maintained third position for the final 7km, finishing and earning the last position on the podium in a time of 05:06:28.

In the women’s race, Cape Town local Meg Mackenzie established and maintained a lead from the start through to the finish, unrivalled from the beginning. “Despite Tweet (Graham Bird) warning me against it, my plan was to climb hard in the first half on the mountains, putting my EU experience to good use, and hopefully getting a bit of a lead on the competition.“

Mackenzie continued to slowly increase the gap between herself and second and third place, edging her way up into the overall top 10. “The second half was much tougher than I expected, there wasn’t any flat! It was unexpectedly tough.” While she soldiered on across the beach, the race for second and third between Karine Bezuidenhout and Annelise Scholtz heated up. 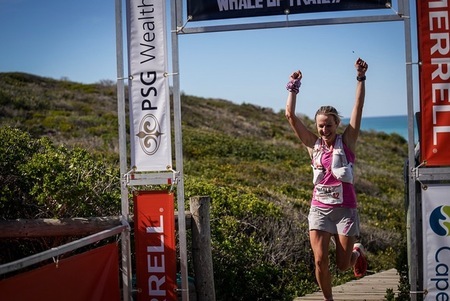 Winning Whale of Trail was a special moment for Mackenzie, who crossed the line in typical Meg-style, grinning from ear to ear. “From the get go I was just grinning the whole race, I was just so happy to be home. Just the vibe, the classic South African hospitality, the good food and unbelievable beauty – everything. It always feels good to win on home soil! Tweet and Tatum put on an unbelievable event, definitely something everyone should put on their race bucket list.”

It wasn’t only Mackenzie who was blown away by the event and location! “The ocean was absolutely unbelievable. At one point, where the trail joins the coast at Noetsie, I actually was forced to stop and just look at it. There was a stupid amount of whales and the trails are really just something to write home about,” said Reilly. 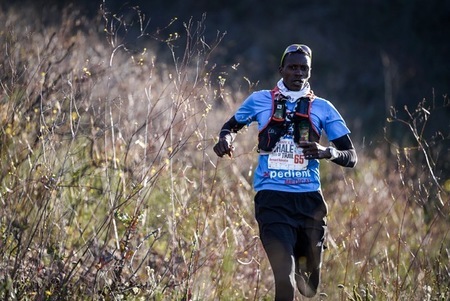 This year saw the first instalment of the Whale of Trail Journey, a two-day event that covers the same route, but over two days. Trail runners set off from Potberg on day one and cover roughly 25km to Noetsie where they overnight in a hiking hut. They then spend the second day following the hiking route towards Koppie Alleen, sharing the finish with the main event. This year 11 runners finished the inaugural Whale of Trail Journey, with three signing up for next year on the finish line, testament to what a great experience it is. Better suited to those who are less fussed about time, and more fussed about the cold beer at the end of the day, the Journey is not timed.

To complete the incredible experience put on by Mountain Runner Events, all finishers got to relax on beanbags and enjoy a slow-cooked potjie while whale watching and sipping on local craft beer at the finish at Koppie Alleen, cheering on their fellow Whalers as they accomplished this bucket-list race! “For us, this event is about all the runners. From Kane to Hirayama Isao who crossed the line in 10:59:48 and all the runners in between. Each one achieving their own personal triumphs over the 53km. To see the sense of achievement and enjoyment on each finishers face is what makes this event very special for us,” said Race Director, Graham Bird.